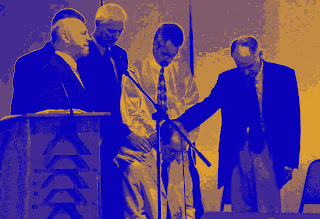 The April edition of Evangelical Times carries the third and final guest column in the series, this time on special people, ie the call to the ministry.
Today’s aversion to anything special is found among a growing number of evangelicals. It manifests itself in various ways. Take the antipathy some Christians have toward revival. Often behind this gut reaction is resistance to the idea that God ever does anything special or out of the ordinary.
Such Christians so emphasise that God works in ordinary ways among us that they leave no room for extraordinary visitations of the Spirit.
Or take the common argument that the Bible is to be read ‘just like any other book’. The very suggestion that the Bible is special and needs to be approached in a special way puts some interpreters in a fairy fit!
But consider too the antipathy found among some evangelicals to the idea of ‘special people’. Unlike the aversions we have considered in the last two months to ‘special days’ and ‘special times’, this phenomenon is not entirely new.
Confused
It manifests itself today chiefly as opposition to the whole idea of a ‘call’ to the Christian ministry. According to R. L. Dabney, ‘the church has always held that none should preach the gospel but those who are called of God’, but some are not so sure.
A recent survey of some 400 men thinking about ministry in the 21st century revealed that 40 per cent were confused as to what was a divine call. This is not surprising given the current climate.
Some are so impressed by the biblical doctrine of the sacredness or priesthood of every believer and are so taken up with the rediscovery of Reformation teaching on vocation that they run to the opposite extreme. They end up with something unbiblical and potentially damaging to churches and individuals.
One can understand people reacting against the wrong mysticism that is sometimes associated with ‘the call’. Agreed, that while there are analogies to the call to be a prophet or an apostle, the call to the ministry is not the same; Charles Bridges wrote long ago that ministers ‘having no extraordinary commission ... do not expect an immediate and extraordinary call’.
Agreed too, that a mystical experience of God’s call is not a firm enough foundation for it; desire, gifts and opportunity are all vital factors in a true call to the ministry.
But what we are protesting against is the idea that there is no such thing as a call, and that more or less any man will do for the ministry provided he is morally upright, reasonably educated and can speak in public.
‘Woe to me’
If anyone can be a minister of God’s Word and there is no call to the ministry, why in Acts 20:28 does Paul say to the Ephesian elders, ‘Keep watch over yourselves and all the flock of which the Holy Spirit has made you overseers’?
If anyone can be a minister of God’s Word and there is no call to the ministry, what does Paul mean when he says in 1 Corinthians 9:16, ‘Yet when I preach the gospel, I cannot boast, for I am compelled to preach. Woe to me if I do not preach the gospel!’?
If anyone can be a minister of God’s Word and there is no call to the ministry, why does Paul say in 1 Corinthians 12:28 that, ‘God has appointed first of all apostles, second prophets, third teachers...’?
If anyone can be a minister of God’s Word and there is no call to the ministry, why does Paul say of Christ in Ephesians 4:11-12, ‘It was he who gave some to be apostles, some to be prophets, some to be evangelists, and some to be pastors and teachers, to prepare God’s people for works of service, so that the body of Christ may be built up’?
Our concern is not to deny that each Christian must conscientiously use whatever gift he has to God’s glory. Rather, it is to say that to deny that there is a special call to the ministry is to make the mistake of supposing that just anyone can try for it. Such an attitude is bound to lead to disaster.
: Wednesday, March 23, 2011