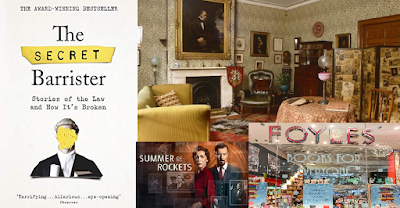 This last week's day off was a bit different, partly because, having had most of it on my usual Tuesday I also carved out an hour or two to visit Thomas Carlyle's House in Cheyne Row, Chelsea, on another day as it is closed on Tuesdays. On Tuesday I was dog free for once and having this new 60+ oyster card I thought I'd see ho far I could go. I ended up in Stratford (not that far). I think I'd seen the Olympic Stadium but I'd never been to Westfield - nice Foyles' there. In the evening we watched the final two episodes of the BBC mini series Summer of Rockets which has been fresh. Through the day I was reading The Secret Barrister which I bought recently.
I have been meaning to visit Carlyle's house for ages. I don't know much about him but he moved from Ecclefechan to London aged 35 and the house became a hub for the literati of the time. The house has been made to look as it would have in the 19th century and filled with pictures of the great man and his wife and cards briefly recalling some of the great and good who visited. It seemed to me that (apart from Jack the Ripper, Florence Nightingale and R L Stevenson) nearly every famous Victorian was mentioned.
Edward Irving is one. Having read Arnold Dallimore's biography some years ago I was aware that the two had shared origins. Irving's story is a very sad one. I liked the comment from Jane (who sounds a fascinating character) years later ‘If I had married Irving, the tongues would never have been heard.’
There was also a reference to Charles Darwin. Jane (who was connected with Erasmus Darwin at one point) said "But even when Darwin, in a book that all the scientific world is in ecstasy over, proved the other day that we are all come from shell-fish, it didn’t move me to the slightest curiosity whether we are or not. I did not feel that the slightest light would be thrown on my practical life for me, by having it ever so logically made out that my first ancestor, millions of millions of years back, had been, or even had not been, an oyster. It remained a plain fact that I was no oyster, nor had any grandfather an oyster within my knowledge; and for the rest, there was nothing to be gained, for this world or the next, by going into the oyster-question, till all more pressing questions were exhausted."
: Saturday, June 08, 2019