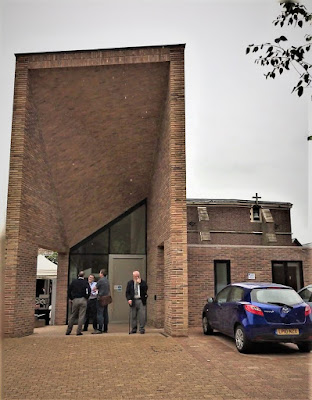 The rest of the conference went off very well and it was good to be there for the whole of it as it improved day on day, I felt. Andrew Randall on knowing God was perhaps a little nervous on day one but really settled into his subject and gave two excellent messages that were warm and pastoral. Scott Swain continued to look the Westminster Confession Chapter 3. I thought the first two messages were perhaps a little pedestrian but when we came to the third session on the Trinity we went into overdrive. I had missed the Themelios article of last year available here, which he presented again to us. It is mind blowing and rather shocking in its own way. let me quote the digest

Warfield is such a hero it is hard to believe he could have been so wrong in this area, yet Scott Swain appears to have him bang to rights.  Others, such as Grudem and Reymond (we could mention Carson and Reeves too, perhaps) have apparently followed him. Wow!

Kevin DeYoung has an analytical grasp and a good sense of humour and so his addresses on creation and providence were great. Perhaps the second half of the one on creation, dealing with male and female, was the stand out portion.
All three days ended with Sinclair Ferguson on 2 Timothy. This was very warm, quite challenging at certain points, and a thorough exposition of New Testament ministry. It will be worth checking out the recordings when they appear - probably here.
It was nice to see Scott Swain getting some sort of revenge on Paul Levy, in the form of a medal for Tweeting.
: Friday, June 21, 2019