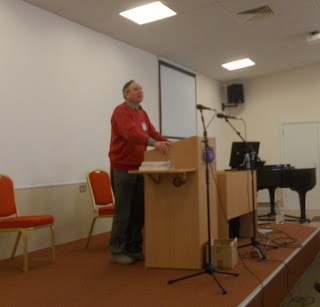 The second session of the morning was led by Paul Brown and was on homosexuality. It was one of the best presentations I have ever heard. The message is worth getting hold of. He began with three propositions.
1. Homosexuality acts are sinful and deserve God's judgement
2. God is willing to have mercy on all who repent and believe no matter how wicked they are
3. Christianity is not a psychotherapy that offers an instantaneous or easy cure to every problem
he then expounded these briefly.
1. It is the act that is sinful. The act is serious sin as is clear from Leviticus. Such acts are also against the God given and natural order. Such sinful behaviour deserves God's judgement even though this is often denied today.
2. We believe there is mercy but sometimes our attitude is not in line with this when it comes to homosexuality. There is a need for sensitivity.
3. We tend to assume a change of sexual orientation is easy. It often is not. The gospel calls us in some ways to a harder existence than that outside Christ. He quoted from an article by Betty Vivian to show how hard it can be to live (see here).
He then went on to talk about homosexuality in the UK today. How many are there? Is it 5% or 6%? The latter figure would mean 3.6 million!. The actual figures for lifetime homosexual feeling are much lower. Civil partnerships have been taken up only a small percentage of the undoubtedly low figures. Candidates for same sex marriage would no doubt be even smaller.
He then went on to talk authoritatively of the high levels of mental disorder that have been found among homosexuals. This is usually put down to society's disapproval but could well be due to damaging childhood experiences that have led in that direction.
He also spoke of change. He mentioned a recent reference to being post-heterosexual (see here). If there can be such a thing why not post-homosexuals? We cannot assume such a change will be easy. We are not all called to be married though celibacy is necessary outside marriage, which is not easy for some whether they are homosexual or not.
There were some helpful things on sin and its power to disorientate. At the heart of sin is a rejection of God's authority. Like Eve, however, part of the problem too is how attractive we find sin. Other notes struck were the need for humility in preaching, the need to see sin as the real problem, and the fact that we are all disabled in one way or another due to sin.
He helpfully rejected the Gay community/heterosexual community distinction, warning that it is nowhere near so simple. A whole variety of sexual perversions and tastes exist. He quoted Rosaria Butterfield's striking statement too "I believe that the Lord is more grieved by the sins of my current life than by my past life as a lesbian" and remarked on the extraordinary survival capacity that sin seems to have.
His final remarks noted how difficult homosexuals are to reach. However, we evangelicals are well able to sympathise with their sense of marginalisation. There ought to be some prepared to engage with them as individuals. In counselling such people we need to know our limitations. Some are converted and we need to do all we can to help such in positive ways.
: Wednesday, May 01, 2013

I tried it just now and it seems to be there. Do try again.

You are right! I tried earlier in the week without success. Many thanks for taking the trouble. And for keeping those of us who are not pastors uptodate with all sorts of good stuff.

I sincerely hope that no gay people ever come to your churches - thankfully there are plenty of inclusive churches where they may find faith, deepen discipleship and contribute to church life at all levels. I am sorry for those churches that follow your reasoning - in my view, you are undermining God's wider kingdom purposes for gay people in our communities and driving your churches into a self-imposed ghetto that will increasingly be seen by society as unremittingly homophobic.

Dear Jane
I sincerely hope that no gay people ever come to your churches either - thankfully there are plenty of gospel preaching churches where they may find faith, deepen discipleship and contribute to church life at all levels. I am sorry for those churches that follow your reasoning - in my view, you are undermining God's wider kingdom purposes for repentant gay people in our communities and driving your churches into a self-imposed ghetto that will increasingly be seen to be out of touch with what God is doing.
G

Dear Gary
I'm sorry but you are incorrect here - the 66,000 civil partnered couples currently registered in our nation are unlikely to find a place in your churches where they may 'contribute to church life at all levels' - without becoming accountable to your questioning on their private life. Inclusive churches will respect civil partnered couples in committed-to-marriage-but-for-whom-marriage-is-currently-unavailable partnerships and will accord them the same respect, privacy and autonomy that they extend to married couples. We are hugely grateful to God for His provision in this. If your churches do in fact adopt this approach then I take back everything I said in the original comment.
But I like what you did there (this is often my technique to make a point).

And further (if I may)
I appreciate that you are the 'alternative' Baptist conference and the title 'All things to all men' says everything I need to know about your view on the position of women in the church, let alone gay people. My thoughts and prayers have been with the Blackpool conference as they have recently discussed the need for a renewal in our thinking about LGBT inclusion - please see: http://www.baptisttimes.co.uk/index.php/news-national-news/924-monday-morning-session-discussion-on-same-sex-relationships
Jane

Dear Jane
I'm glad you appreciate that we are coming from opposite poles and yet are still willing to interact and even willing to appreciate my technique! Thanks for the link too. We had a family come to us last Sunday who've been at a BU church nearby and I think it is the sort of attitude you are highlighting that has driven them out and towards us so it is good to get the background.
BTW we question everyone's private life here. We are just as hard on heterosexuals as homosexuals. We simply follow the Bible view that all sex must be confined to the marriage bed and marriage is between a consenting man and woman.
I really would recommend you read the book by Rosaria Butterfield mentioned elsewhere on this blog. She is the former professor of queer studies at Syracuse University and was a practising lesbian but has turned from all that. I'm sure you will find it something of an eye opener and may be it will help you to see how we ultra-conservatives see things. (Just google her name for info. She's become a psalm singing Presbyterian not a Baptist I should warn you - can't have everything I guess.)