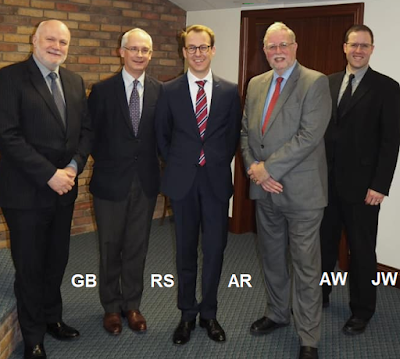 Eleri and I made a short trip to N Ireland last week. It is only the second time I have travelled there. We bussed from Golders Green to Stansted then flew Ryanair to Belfast International. The bus was an hour late but the plane was late too so we didn't need to panic. We had hired a car and drove 20 minutes west to an airbnb near Randalstown which was just tight for us. We had a little wander around the next day seeing Antrim Castle Gardens and walking along the River Bann as far as the massive Lough Neagh (biggest fresh water lake in the British Isles).
We then moved on to Magherafelt and a wander round there. We then called on our friends the Roks who settled last year in Magherafelt last year after being in the seminary for two years. Alexander has become pastor of the Reformed Baptist church in the town. It was lovely to enjoy their hospitality in their lovely new home.
That evening we went along to the attractive building the RBs have in town for the official induction. While without a pastor the church has been under the oversight of Maidenbower Baptist in Crawley. If that sounds a little remote one should bear in mind that in previous such situations over its 22 year in existence churches in America have taken that role and, anyway, Crawley is right next to Gatwick!
The service was led by one of the deacons and another gave the history of the call. The current lead pastor in Maidenbower, Jeremy Walker, preached and led in the laying on of hands. he was assisted in this by Robert Strivens (formerly elder with us and Principal at the seminary but now in Bradford on Avon), Austin Walker (now retired as pastor in Maidenbower) and myself. We prayed.
At the end of the meeting greetings were shared from churches in America and Wetzlar in Germany. A number of friends were present and it was good to have further fellowship over a lovely spread. I enjoyed talking to Reuben Saywell who had travelled as we had, Andrew Rycroft (Baptist pastor in Millisle), Ted Donnelly, John McDermott from the Baptist church, etc.
It was good to be there.The service can be found on Facebook here.
: Tuesday, January 29, 2019