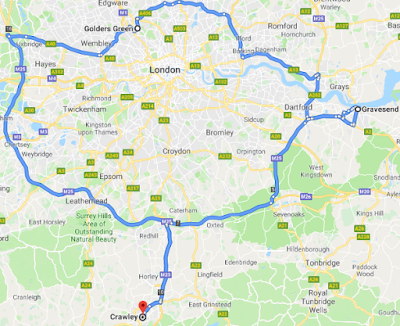 The last few weeks have been pretty busy. My daughter-in-law's younger sister was married on the 14th and it was good to be there. The wedding was held at King Alfred's School, where my first son's wedding reception was held ten years back. Lovely day. Nice to have family around for that and for some days before. The following Saturday (21st) we headed down to Crawley where our friends the Saywells were having a house warming cum birthday party for their boys. Nice to meet Jeremy and Alyssa Walker and many others new and old. We were able to pop in and see our friend Georgina too before she heads back to New Zealand. I'm glad we did. These are not easy days. before that Eleri and Owain had gone to Essex to view birds of prey and I had been at a men's meeting followed by tract giving in Golders Green. I then took the train to meet Eleri and lost my wallet en route somehow.
This week is a week of prayer and so I was up early on Monday for the first of these. The next was on Tuesday morning and then we gave our midweek meeting over to prayer and will meet again, God willing. We have had seven or eight at each meeting and most have prayed aloud. My wife's brother-in-law was with us last night and that was nice.
: Thursday, September 26, 2019