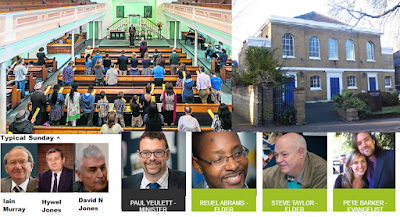 It was good to be at the bicentenary celebration in Grove Chapel, Camberwell, this afternoon, part of a weekend of meetings. We have no particular connection with the chapel but it is a bastion of Reformed preaching and there were many people present who we know (as well as many we don't). There have been ten ministers over the 200 years. I know the five still living to speak to and know the names of others like Joseph Irons, the founder pastor and Henry Atherton. Those still living with the dates when they served are Iain Murray (1961-69), Hywel Jones (1970-80), David N Jones (1981-93), Mark Johnston (1994-2010) and Paul Yeulett (from 2014). (Do note the celtic flavour that persists over the years). This afternoon Paul preached on God the Father (although it was really on all three persons). Reuel Abrahams, one of the elders chaired. Nice tea to follow and plenty of chats. We skipped the Q&A.
: Saturday, November 02, 2019