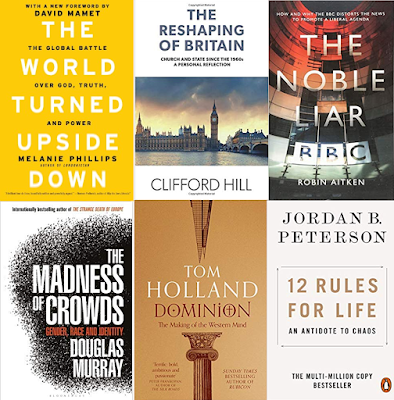 We had a session at the Westminster Fellowship on Monday where Keith Berry recommended some books worth reading. He mentioned The Noble Liar: How and Why the BBC Distorts the News to Promote a Liberal Agenda by Robin Aitken exposing BBC bias, The Reshaping of Britain: Church and State since the 1960s, A Personal Reflection by the veteran evangelical Clifford Hill, charting his own story and describing changes in the UK in recent decades, and a large book by the Jewish journalist Melanie Phillips called The World Turned Upside Down: The Global Battle over God, Truth, and Power.
What we are talking about, I suppose, is right wing writing that in one way or another exposes evils in our society and analyses them in a way that is of great interest to evangelical Christian. One could add Douglas Murray's recent The Madness of Crowds: Gender, Race and Identity and slightly more tangential Tom Holland's Dominion, the making of the western mind both recommended to me recently from more than one source. I guess the writings of Jordan Peterson might also be mentioned. Do check them out.
: Friday, November 08, 2019