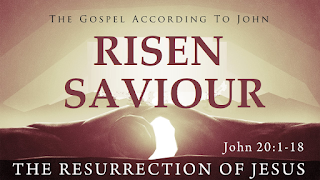 We started a little slowly with things not quite ready for communion in time but we got there. I read Sinclair Ferguson on Calvin on communion yesterday and it was good to go through it again. I'm still not convinced but Ferguson and Calvin have helpful things to say and shared some of that. A visiting Nigerian woman and a Chinese man joined us for communion. I gave out the elements myself as there were no deacons around. Numbers continued to grow right up to sermon time and by then we must have been around 40. Lots of Nigerians. Numbers were a lot fewer in the evening. in between we had ten or more here for lunch. There was a minor disaster with the oven timer but Eleri just sailed on through and you wouldn't have realised. Nice time. I preached on the resurrection, of course. I went to the first two parts of John 20 (I'll probably do the second half next week) again inspired by an essay on Calvin in Sinclair Ferguson's new book.
: Monday, April 02, 2018