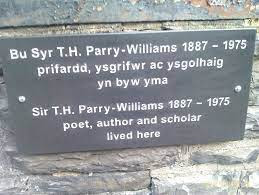 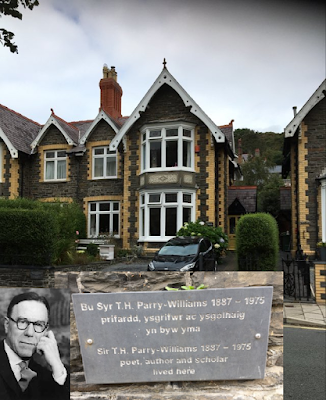 I seem to be noticing more plaques in Aber than  normal. This one is for Sir Thomas Herbert Parry-Williams (1887- 1975). Parry-Williams was a poet, author and academic. Born at Tŷ'r Ysgol (the Schoolhouse) in Rhyd Ddu, Caernarfonshire, he was educated at the UCW, Aberystwyth, Jesus College, Oxford, the University of Freiburg and the Sorbonne. As a poet, he was the first to win the double of Chair and Crown at the National Eisteddfod, which he achieved at Wrexham in 1912 and repeated at Bangor, 1915. He was a conscientious objector in World War. I He was Professor of Welsh at Aberystwyth, 1920-1952. He co-founded the university's Centre for Advanced Welsh and Celtic Studies. He was awarded D.Litt. degrees by the Universities of Wales (1934) and Oxford (1937) and was knighted in 1958. He was also given an honorary doctorate by the University of Wales 1960 and made an Honorary Fellow of Jesus College, Oxford, 1968.
: Monday, August 23, 2021