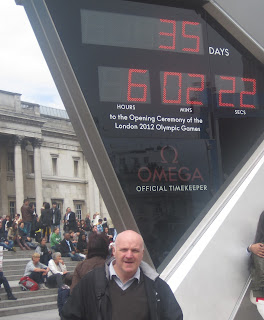 I'm not that excited about the Olympics and the fact it is in London doesn't seem to be making that much difference except that whenever I see this countdown machine in Trafalgar Square I want to stand by it. Anyway I did so 18 days ago and thought about putting a photo up here. I forgot though so I've doctored it so that I will appear to be in the future for a few hours before the picture looks quite real later in the day. As I write the figure is officially
35
Days11
Hours22
Minutes53Seconds
: Friday, June 22, 2012