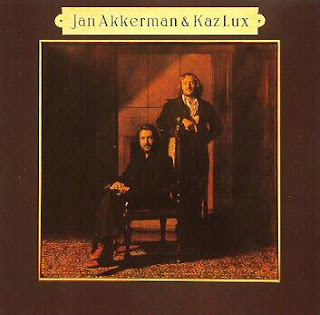 Eli is a 1976 post-Focus studio album by the Dutch guitarist Jan Akkerman featuring the Dutch singer Kaz Lux. Akkerman and Lux had previously collaborated in the band Brainbox. Pierre Van Der Linden, also ex-Brainbox and ex-Focus also plays on the album, along with other top artists - Jasper van 't Hof and Rick van der Linden (keyboards) Warwick Reading (bass) Richard DeBois (drums) Neppie Noya (percussion) with backing vocals from Margriet Eshuis, Maggie MacNeal and Patricia Paay. It is something of a concept album telling part of the story of the mysterious Eli. Not all of Lu'x lyrics get sung and there are several instrumental tracks in varying styles. The most famous of these is Tranquilizer (performed on the OGWT at the time) with one or two other tracks I recall. It won the Netherlands' Edison Award in 1976 for Best Album and is a sophisticated collection featuring rock, jazz and classical styles. It took me quite a while to get into. Things were not helped by a rather unimpressive UK tour that gave the fans no easy rides.
: Thursday, December 03, 2015