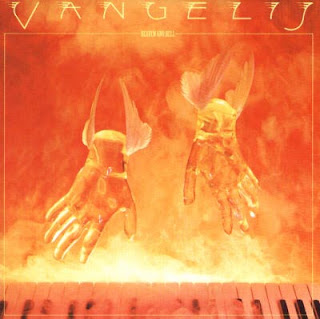 We have a had a Vangelis before in this series and I could add more but I'm limiting it to two selections. This second one appeared way back in 1975 and was the fifth solo album. Sensibly instead of trying a heaven section and a hell one, the themes are mixed. The LP contained one part on each side but originally track titles were included. These were "Bacchanale" – 4:40; "Symphony to the Powers B" (Movements 1 and 2) – 8:18; "Movement 3" (from "Symphony to the Powers B") – 4:03 "So Long Ago, So Clear" – 5:00; "Intestinal Bat" – 3:18; "Needles and Bones" – 3:22 (a favourite of mine); "12 O'Clock" (in two parts) – 8:48 (also brilliant); "Aries" – 2:05 and "A Way" – 3:45.
Apparently the album gained worldwide recognition through the use of "Movement 3" as the theme for the TV documentary series Cosmos: A Personal Voyage. The album was the first composed and recorded by Vangelis in his new Nemo Studios in London, the studio he used until 1987.
The album has classical overtones, in contrast to the progressive rock of other albums. Vangelis would return to classical style work ten years later, on Mask (1985). He dabbles with choral sections (featuring the English Chamber Choir conducted by Guy Protheroe; Vana Veroutis also features on "12 O'Clock") joined with his now typical electronic washes of sound, a concept he would again return to in the nineties with Conquest of Paradise and Mythodea. The album marks the first collaboration between Vangelis and Jon Anderson, on "So Long Ago, So Clear" (it came about when Yes tried to recruit Vangelis as their keyboard player and continued more fully a few years later). Heaven and Hell reached number 31 in the UK album charts in January 1976.
: Wednesday, December 30, 2015