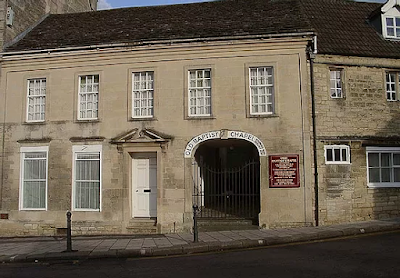 A little while back I noticed some grease stains on my Sunday suit (at present there is only one - important information here) and so I took it to the dry cleaners. I was supposed to pick it up the following Friday but forgot. I spent Saturday July 17 in Legoland with family and so I commissioned my youngest son to collect the suit. Sounds simple but he came back with the wrong one! Thankfully it's been so hot recently that no-one sees your jacket and so an old blue summer one was okay with a pair of smartish blue trousers. I think I got away with it.
I was not in Childs Hill. Reuben Saywell was preaching for me. I was in Bradford-on-Avon, a church I know a little. Our former elder, Robert Strivens, is the present pastor. I arrived there in good time and we began with a couple of hymns in the graveyard. Inside they have just had the central block of pews removed and one or two other changes. The chairs have not arrived yet but a stand in set (should that be sit in set?) passed muster. There must have been about fifty present, mostly older women, but some younger males around too. I preached on John the Baptist from Luke 7. In the evening it was Christ our city of refuge from Joshua 20. It seems to have been appreciated.
I spent the afternoon with my sister-in-law and her family in nearby Trowbridge. They attend Grace Reformed Baptist, Hilperton, as does the former pastor and elders. There were some issues a few years back, mostly now resolved.
Anyway, an enjoyable day, and hopefully a blessing to those who came along.
: Saturday, July 24, 2021