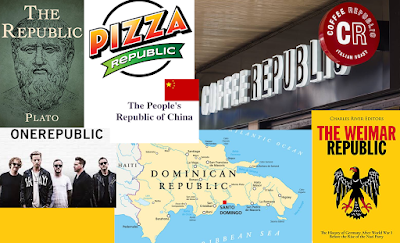 1. Plato's Republic - Socratic dialogue by Plato (c 380 BC) about justice, the order and character of the just city-state and the just man.
2. Dominican Republic - Country in the Caribbean
3. Banana Republic - Fashion chain owned by Gap.
Also used to refer to describes a politically unstable country with an economy dependent on the exportation of a limited-resource product, such as bananas or minerals. In 1901, American author O. Henry coined the term to describe Honduras and its neighbours under economic exploitation by US corporations, such as the United Fruit Company
4. Coffee Republic - Coffee chain
5. OneRepublic - American pop rock band formed in Colorado Springs, Colorado, in 2002
6. Constitutional Republic - a form of indirect democracy where the represenatives are elected and the rules set down in a written constitution. It is often simply called a "republic". The head of state and other representatives are elected. They do not have uncontrolled power.
7. People's Republic - a title used by some sovereign states with republican constitutions. The term was initially associated with populist movements in the 19th century (ege German Völkisch movement and Narodniks in Russia). A number of the short-lived states created during WWI and its aftermath called themselves people's republics. Many of these were in the territory of the former Russian Empire which collapsed following the Russian Revolution. 1917. Additional people's republics were created following the Allied victory in WWII. The term has become associated with countries adhering to Marxism–Leninism, although its use is not unique to such states.
8. Pizza Republic - Pizza chain
9. Weimar Republic - Germany's government 1919-1933, the period after WWI until the rise of Nazi Germany. It was named after the town where Germany's new government was formed by a national assembly after Kaiser Wilhelm II abdicated.