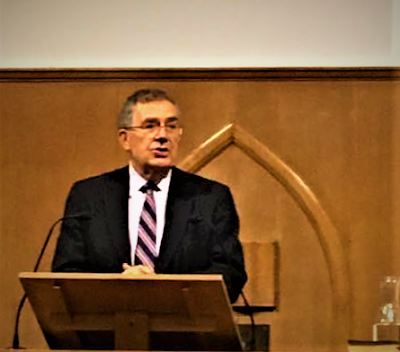 I am sorry not to have written this up before now but last Tuesday we had a very special meeting at the Pastor's Academy in Finchley when Sinclair Ferguson delivered to a packed audience the annual Dr Martyn Lloyd-Jones lecture. The year 2019 is the fiftieth anniversary of the delivering of the lectures in Westminster Seminary that became the book Preachers and preaching.
It was a long paper but the momentum never sagged. There were three parts - the lectures themselves, the preaching of the preacher and the preacher who wrote the book.
Sixteen lectures were given over six weeks with two final sessions for questions and answers. Lloyd-Jones liked preaching books with plenty of anecdotes and his own lectures are packed with them. One of his greatest concerns was with the matter of what is most often called unction. Dr Ferguson suggested that while we may reject Lloyd-Jones's exposition we cannot deny the evidence of church history which suggests that his view that we need the Spirit always to preach and sometimes he comes powerfully is correct. Lloyd-Jones favourite story of this was that of John Livingstone at the Kirk o' Shotts when some 500 were either converted or something similar Livingstone himself wrote

It is most probable that no gift, no pains, a man takes to fit himself for preaching, shall ever do good to the people or himself, except a man labour to have and keep his heart in a spiritual condition before God, depending on him always for furniture and the blessing. Earnest faith and prayer, a single aim at the glory of God and good of people, a sanctified heart and carriage, shall avail much for right preaching. There is sometimes somewhat in preaching that cannot be ascribed either to the matter or expression, and cannot be described what it is, or from whence it cometh, but with a sweet violence, it pierceth into the heart and affections, and comes immediately from the Lord. But if there be any way to attain to any such thing, it is by a heavenly disposition of the speaker. A man would especially read the writings, and labour to follow the gifts, of those whom God hath, in the most eminent manner, blessed with the converting and confirming of their hearers, rather than those who seem to have rare gifts for learning and delectation, without such success.

As for Lloyd-Jones as a preacher Ferguson singled out the humbling of his natural pride and his new understanding of the cross when someone showed him that he was preaching regeneration but failing to point people to Christ. On Romans 5 Lloyd-Jones says "The Christian life is in many ways a matter of logic, a matter of deduction" and he famously spoke of preaching as logic on fire or eloquent reason. His reading of Calvin, Edwads and Warfield confirmed him in this. Providentially he had a medical training and made use of this in his approach to preaching. However, it was more than that. As Dr Ferguson pointed out there have been many preachers with a medical training who did not preach like Lloyd-Jones. More important then, it was suggested, was his taking up of the recommendation of Lord Horder, his medical mentor, that his students read Jevons on logic. As for eloquence Plato's emphasis on logos, ethos, pathos was again important. Lloyd-Jones had the logos but believed he lacked pathos (as most preachers do). Ethos is to do with the integrity of the preacher and his message – and ourselves your servants for Christ’s sake.
We ended with some personal reminiscences and a reference to a picture of Lloyd-Jones being introduced to the Queen. At the end I felt like I did when I finished reading the two volume biography. This was a truly holy man, an eloquent preacher used by God. Only to be like him to some extent.
: Saturday, October 19, 2019