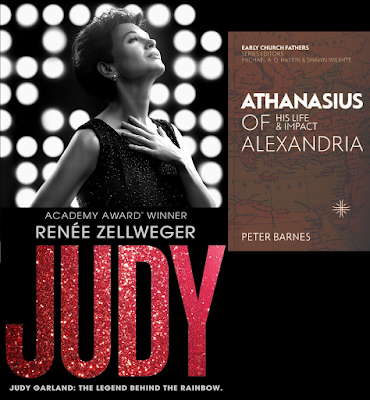 I did one or two other things but the main things yesterday trying to read a new book on Athanasius by Peter Barnes (not very much progress there) and, in the evening, going to see the film about Judy Garland, Judy, with Eleri. Judy Garland is very much my mum and dad's era but her life is a real draw and this performance by Renee Zellweger was pretty amazing. The child star who lives a rotten life despite immense talent is almost a cliche but it is still moving to see just how that worked out in one tragic and all too short life. As with the recent Laurel and Hardy film the picture takes place mostly in Britain, this time in London, where Bernard Delfont  (yes, him again) has arranged for Judy to perform at the Talk of the Town, which she does for money with only one or two wobbles. The childhood info is passed on via flashbacks. Judging by the size of cinema we were in the film has been out a few weeks now but I like to avoid spoilers as I can. So suffice to say that the film end on quite an emotional high,as films ideally should. It is hard to be sure what might have been done to make poor Judy's life a better one unless she had lived a much more ordinary life.
: Wednesday, October 23, 2019