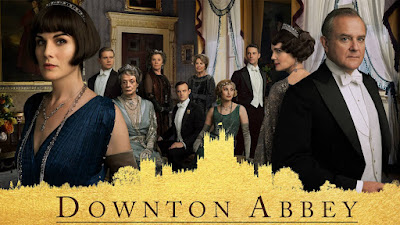 Monday was a full day with Westminster Fellowship followed by an Evangelical Library. After that though my good wife picked me up and we went to see the film version
Downton Abbey.
We have left a bit late so we were in a smaller room in our local Vue than I would have wished but the film's own merits soon overcame any distractions.
We could have done without the homosexual story strand (why did Julian not go for something about racism we would have preferred that - maybe). The film does try to take it self seriously with observations on the decline of England's stately homes but its great strength is its gentle humour. It is very well written and exploits the potentialities of the old English class system to the full. This time Molesely (Kevin Doyle) even outshone Lady Grantham (Maggie Smith) for humour. They feasibly managed to get Mr Carson (Jim Carson) back (and found a part for his real life wife) but couldn't find anything for Bates to do in such a crowded cast.
Do seek it out,
: Thursday, October 10, 2019