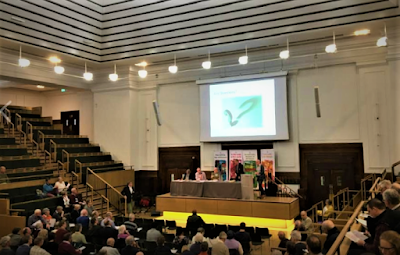 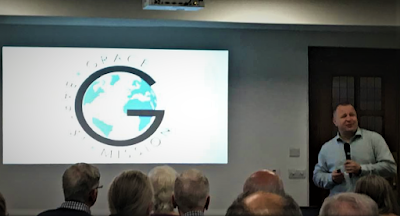 It was good last Saturday to be at the GBM Annual Meetings in the Friends Meeting House once again. Things appear to be on a  better financial footing in some ways than the last time I was present thanks to some hard decisions and sacrifices. Communications man Jim Sayers leaves at the end if the year and no replacement has been found which is also a matter of concern. After the delegates meeting and some lunch I attended first a session with Theo and Sonia Donner. Theo continues to lecture at the seminary in Medellin and is currently in the process of getting a large book on hermeneutics in Spanish published. This was followed by a session with Andrzej Kampcinski who works pastoring a small church in Legionowo just outside Warsaw, Poland. This was led by Graham Field the current president.
I then attended a very full session that featured the new work the Murfitts plan to do in Madeira, the ongoing work of James Hammond in Bordeaux and the seminary in Zambia, something about the radio work and envision teams and a local church feature on giving and evangelising ethnically diverse neighbours.
By this time my brain was bursting so I decideed to skip the final session where Theo Donner was preaching and no doubt more info was shared by people from W Africa, Peru,, etc.
The sheer size and diversity of what is going on is striking. One inevitably wonders about some things but this does seem a much better way of doing mission than much that is onoffer
Great to see many familiar faces and one or two new ones.
: Monday, October 28, 2019