10 Leaders with their country in their name 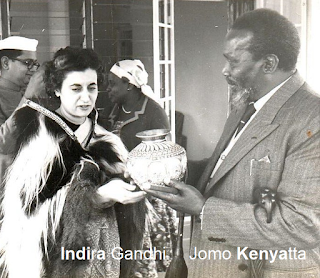 1. Jomo Kenyatta, first president of Kenya. He took the surname (“Light of Kenya”) when in London in the 1930s.
2. Salman bin Abdulaziz Al Saud, king of Saudi Arabia, or any of his predecessors back to Muhammad bin Saud, who ruled 1726–1765.
3. ‏Pierre Mendès France, prime minister of France, June 1954 to February 1955.
4. Solomon Mamaloni, prime minister of the Solomon Islands three times between 1981 and 1997.
5. Alexander Dubček. First Secretary of the Communist Party of Czechoslovakia, 1968-69. Although he was actually a Slovak.
6. Ulysses S Grant, President of the United States, 1869-77.
7. Indira Gandhi, prime minister of India, 1980-84.
8. ‏Giorgi Margvelashvili, president of Georgia.
9. Salvador Sanchez Ceren, president of El Salvador.
10. King Mswati III, and his predescessors, King of eswatini (Swaziland).
: Saturday, June 13, 2020