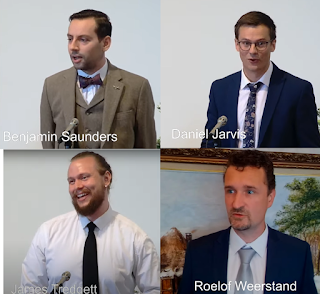 It was a great pity not to be able to be at the seminary today for the end of year meeting. At least we were able to tune into YouTube for a live feed. About 70 were watching. (I have no idea of how many were present at the Kensit Church). The meeting was chaired by Hugh Collier and after Bill James's upbeat report on what has been a difficult year some 13 leaving students spoke. This included a Frenchman who will be working in Paris and two Dutchmen already back in the Netherlands. Benjamin Saunders has been based with us (not that there has been much opportunity for interaction, sadly) and will be going on to work with Robert Strivens in Bradford on Avon, where Dan Jarvis is originally from. James Tredgett is an LCM evangelist. One man was leaving to be a music minister in an Anglican church. Such a statement bemuses me as do one or two other things about the seminary. Garry Williams preached a fine sermon from Isaiah 6.