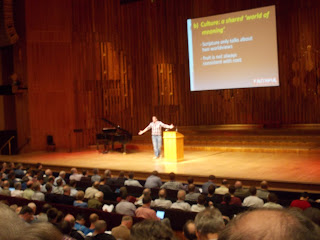 This year's Proclamation Trust Evangelical Ministry Assembly is in the Barbican for the first time. There are some disadvantages to the venue besides its unfamiliarity but the idea of getting 1250 people in one room is attractive and as we get used to it I'm sure it will grow on us. The EMA tried to break out a few years ago to Westminster Central Hall but then retrenched to St Helen's where only 850 can be catered for.
Day 1 included three plenary sessions and an afternoon seminar stream. Vaughan Roberts was the token Anglican for the day (how things change) kicking us off with  the first 12 verses of 1 Peter.
Dan Strange then took us to the strange world of cultural studies and how we engage with m modern man. One sometimes fears a lot of work is being done to get to some fairly obvious points but it overall it is pretty stimulating. His enter, explore, expose, evangelise paradigm is good and the need for subversion and fulfilment in preaching was most interesting.
In the afternoon I chose to hear Mark Dever on ministry in  changing world. That was very good. He gave us the option of Q & A or coffee next. I was one of only two who voted for coffee and so we had an okay bit of interaction to close.
The final session was Paul Mallard on Colossians 1:9-14, which like the rest of the day was okay. Indeed okay sums it up for me. Being a grumpy old man, lots of things annoyed me (having a singer with a microphone to lead the singing, out of sync videos, students reading the Scriptures badly instead of letting the man who was about to preach on it, the lack of EP books on the bookstall, etc) but I am wise enough to let those go.
What is sad, however, is firstly the way conferences lose their edge. I remember the early days of EMA when you had Dick Lucas, Australians we had never heard and, above all, an eagerness to carefully expound Scripture. Obviously things move on but one can't help feeling that, like most conferences, it is now a matter of filling slots with good material rather than anything more inspired.
More disturbing is the whole matter of preaching. There was a moment at the end of Vaughan Roberts address where a strange thing happened. First, he quoted Lloyd-Jones (that's rare enough at EMA). Then, he actually preached (from the heart as he would say). I have heard him say before that he is unhappy with being called a Bible teacher. He wants to preach. And for those few minutes, and to some extent before,  that is what he did. As the Lloyd-Jones quote goes, the man gave me an idea of the glory of God and that was worth the whole of the rest of the day.
I should add that a conference is always more then the sessions. It was good to see many people. With some there was time for just a wave but it was good to chat at some length with others, including two people in particular who have faced recent deaths in the family.
So we'll see what we get today and hopefully I'll share it later.
: Tuesday, June 25, 2013