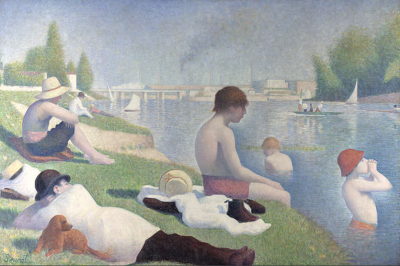 We've reached the Post-impressionists and last Tuesday we headed again to the National Gallery. We looked at a Van Gogh chair and Cezanne's bathers but the bulk of the time was spent looking at Bathers at Asnieres by Georges Seurat. The first thing you notice about it is its size. It is a massive picture. By now we are used to pictures of all sorts of things but in 1884 this was not an expected subject - a bunch of workers enjoying a rest on the river bank. It apparently took two years to paint and was not greeted with great enthusiasm, never being sold in Seurat's short life time. It is undoubtedly a great painting, however, and to hear an expert talk about it and to spend some time just looking at it was a joy and an education. The boy in the water appears to be whistling or making a duck call. Is that aimed at some creature in the water but out of shot. The dog and the other human figures seem to be looking that way. In the distance a boat can be seen with a lady and gentleman being rowed by a man. The woman appears to be hiding from her view the working class types in the main picture by strategic use of a white parasol. Factories can be seen in the distance. Seurat had a colour theory that involved placing colours next to each other so that the paint is not mixed on the palette, rather the eye does the mixing. He went on to develop pointillism. That is what gives the picture its incredible sunniness. As I looked at the picture the geometric shapes began to stand out - straight lines, circles and triangles. The more one looks the more one sees.
: Friday, June 07, 2013