The Docrines of Grace in an Unexpected Place 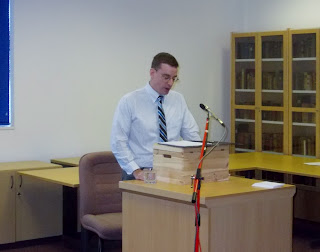 It was a great joy to be at the Evangelical Library in London last Monday for the 2013 Annual Lecture. It was very encouraging on all fronts. A crowd of may be as many as fifty gathered. The lecture was a blessing in that it was given not only by an expert in his field (the speaker Mark Stevenson completes his PhD in this very subject shortly) but one with the rare ability to give his material in a popular format of just the right length. Given that Brethrenism and especially their Calvinistic leanings is pretty much untrodden ground for most of us, this lecture was something special indeed. Even the question time was excellent with good questions and precise and informative answers. We are so glad that Canadian Mr Stevenson was willing and able to come from the States mainly to give this lecture.
So what was said? Audio CDs are available from the Library and I hope to put the lecture on the website in written form in due time. Meanwhile, to summarise, although the Brethren are not know for their Calvinism there was a distinct Calvinistic bent in their early leaders. Mr Stevenson highlighted this for us by showing firstly their view of the condition of fallen humanity and secondly their view of election or predestination. He focused chiefly on J N Darby but quoted others.
Mark Knoll has described the early Brethren as "unrelentingly Calvinistic". This is seen in Darby's references to the total ruin of man. Man is free to will but not free in his will. See here for a letter from 1872 full of Calvinistic elements. Mr Stevenson also related the fascinating story of a dispute over this matter with D L Moody where Darby came out the more Calvinistic. (Try here for that). William Kelly, commenting of Ephesians 1:3 wrote that " It is when Christ has begun to dawn on the soul that you begin to realise that you have been lying in all that is dark and loathsome, though a glimmer of hope may break through the clouds. You are seriously conscious of evil things to which you were insensible before. This is an effect of God's mighty and gracious operation The thing that was most interesting was the way Darby's Calvinism (if we may call it that) sprang out of his dispensationalism. Darby and others would say they got their doctrines from the Bible but the probably root is in Anglicanism, the 39 Articles being fundamentally Reformed, not Lutheran or Arminian. Arminianism began to eat into Brethrenism in the 1920s.
Perhaps we can finish with a great quote from George Muller (found here)
"Before this period I had been much opposed to the doctrines of election, particular redemption, and final persevering grace; so much so that, a few days after my arrival at Teignmouth, I called election a devilish doctrine. I did not believe that I had brought myself to the Lord, for that was too manifestly false; but yet I held, that I might have resisted finally. And further, I knew nothing about the choice of God's people, and did not believe that the child of God, when once made so, was safe for ever. In my fleshly mind I had repeatedly said, If once I could prove that I am a child of God for ever, I might go back into the world for a year or two, and then return to the Lord, and at last be saved. But now I was brought to examine these precious truths by the word of God. Being made willing to have no glory of my own in the conversion of sinners, but to consider myself merely as an instrument; and being made willing to receive what the Scriptures said; I went to the Word, reading the New Testament from the beginning, with a particular reference to these truths. To my great astonishment I found that the passages which speak decidedly for election and persevering grace, were about four times as many as those which speak apparently against these truths; and even those few, shortly after, when I had examined and understood them, served to confirm me in the above doctrines.
"As to the effect which my belief in these doctrines had on me, I am constrained to state, for God's glory, that though I am still exceedingly weak, and by no means so dead to the lusts of the flesh, and the lust of the eyes, and the pride of life, as I might and as I ought to be, yet, by the grace of God, I have walked more closely with Him since that period. My life has not been so variable, and I may say that I have lived much more for God than before. And for this have I been strengthened by the Lord, in a great measure, through the instrumentality of these truths. For in the time of temptation, I have been repeatedly led to say: Should I thus sin? I should only bring misery into my soul for a time, and dishonour God; for, being a son of God for ever, I should have to be brought back again, though it might be in the way of severe chastisement. Thus, I say, the electing love of God in Christ (when I have been able to realise it) has often been the means of producing holiness, instead of leading me into sin. It is only the notional apprehension of such truths, the want of having them in the heart, whilst they are in the head, which is dangerous."
: Friday, June 07, 2013