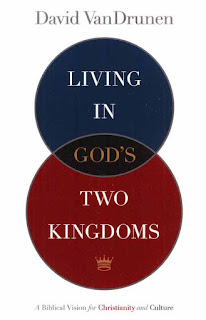 If you think I'm not reading Christian books any more, that is not the case. I'm just finishing David VanDrunen's Living in God's Two Kingdoms. On Monday we will be discussing it at the Theological Study Group at the John Owen Centre. This is a rewrite of the professor of systematic theology and ethics at Westminster Seminary California's thesis and makes for interesting and persuasive reading. As he suggest many Christians probably work on the basis he advocates. I found it quite persuasive, although being ignorant of some of the issues I'm sure there are flaws with some of his arguments.
The “two kingdoms” approach to Christianity and culture is grounded in creation and what believers hold in common with unbelievers, not to do with eschatology as transformationists prefer.
After a survey of the current scene VanDrunen divides his book into three parts. First, in First Things and Last Things he expounds biblical teaching on Adam’s role in God’s plan and how Jesus fulfils that role as the last Adam. Redemption is not “creation regained” but “re-creation gained”. Believers do not now take up Adam’s task and do it right but celebrate the fact Christ has accomplished the task.
Next in Living in Babylon we look at sojourning in the Old and New Testaments. We live in both the “common kingdom” of the Noahic covenant and the “redemptive kingdom” established through the Abrahamic covenant.
Part Three, Christian Life in Two Kingdoms explores the practical application of his theological vision. Chapter 6 discusses the role of the church in the Christian life (corporate worship, ethics, ministerial authority, etc). Chapter 7 looks at the two kingdoms idea in the areas of education, vocation and politics.
: Friday, June 14, 2013