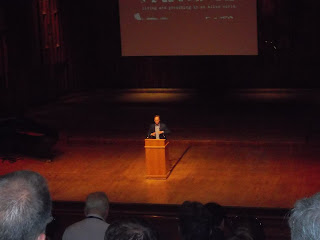 A combination of events today meant that I only caught the session with Garry Williams. So I missed both main Mark Dever sessions somehow and only caught his seminar, which I now see is all pretty much written out here. The irony is that it was Dever's presence that helped me decide to come. That and the opportunity to meet people. I particularly enjoyed spending an hour with my friend Paul Pease from Hook. What a good bloke.
So, Garry Williams. He was given the history slot and looked at Augustine's City of God by briefly surveying Augustine's life and background then giving us an anatomy of the cities of God and earth and three applications. Garry is not as hip as Mike Reeves (no dead white guys here, rather references to amateur dramatics and secondary authors) but he is able to read big books and succinctly synthesise and summarise them and that is quite a skill. Simply to hear someone in this context say that we need theologians not pragmatists is a breath of fresh air. It would be interesting to know what members of the state church (half the people there were Anglicans) thought of his contention that the state is not neutral.
The anatomy
1. Only unfallen angels and saved people are in the City of God. All others are outside of it.
2. Both cities manifest themselves in different ways down the years of history.
3. Satan is behind the earthly city.
4. Both cities are driven by love - love for God or love for self.
5. You can, therefore, rightly understand the earthly city as being dominated by disordered love. He added that Augustine believed that all created things are innately good. Satan creates nothing he only destroys. By nature it is as if man is hanging upside down.
6. The earthly city is divided against itself. Self-idolisation means everyone wants to be God and so the lust for dominion means peace is impossible.
7. The earthly city ends in eternal death.
The application
1. There is no neutral ground and so we must expect conflict.
2. Don't pin your hopes on this world.
3. Where is the earthly city? Out there but we are not without sin and the need for grace and repentance is constant.
*
So a good conference on the whole. The venue just about works. I'd hate to think what they are paying for it (they charged us £82 more than you will pay for next week at the Met Tab). It is all set for next year too and you can book now. I've already forgotten the memorable title they've chosen. (I can't see many people paying £6 for the lunches next year if they are not improved). Dominated by non-Anglicans and in a neutral venue, the claim that this is not an Anglican conference looked stronger than ever this year. As with all conferences, the best thing about it is the chance to meet old friends and new which I very much enjoyed.
: Thursday, June 27, 2013