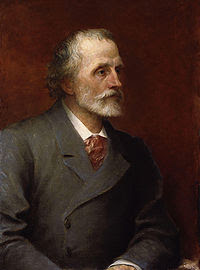 George Meredith (1828-1909) is not a popular writer today and I certainly have not read anything by him. He was born in Portsmouth. His mother died when he was five and at 14 he was sent to a Moravian School in Germany for two years. He read law and was articled as a solicitor but abandoned that for journalism and poetry. He collaborated with Edward Peacock (son of Thomas Love Peacock) on a privately circulated literary magazine and married Peacock's 28 year old widowed sister Mary Ellen Nicolls (1849). He collected his early writings, first published in periodicals, into Poems, published to some acclaim 1851. In 1856 he posed as the model for The Death of Chatterton by Pre-Raphaelite Henry Wallis. His wife ran off with Wallis, 1858, and died three years later. His collection of "sonnets" Modern Love came of this experience as did his first major novel The Ordeal of Richard Feverel.
He married Marie Vulliamy (1864) and settled in Surrey, continuing to write novels and poetry. He had a keen understanding of comedy and his Essay on Comedy (1877) is still quoted in discussions of the history of comic theory. In The Egoist (1879) he applies some of his theories of comedy. This work and others also highlight the subjugation of women during the Victorian period. During most of his career, he had difficulty achieving popular success. His first truly successful novel was Diana of the Crossways (1885).
He supplemented his often uncertain writer's income with a job as a publisher's reader and had many friends in the literary world. He succeeded Tennyson as president of the Society of Authors (1905) and was appointed OM by King Edward VII.
: Friday, June 07, 2013