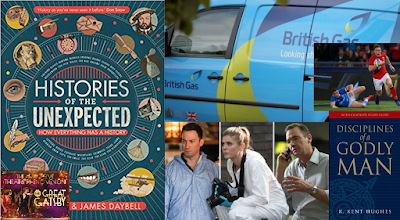 This week's day off had to be shunted on to Saturday, as I was at a seminary board meeting on the Tuesday. There was a men's meeting at the church at 9 am where we gathered for coffee and prayer. We had a good chat about prayer and it was good to have seven present all making their contribution. Discussions about prayer tend to make me feel guilty but also resolved to try harder.
One of my sons and his wife were with us for the weekend so that was nice, although I managed to mess up an appointment with the gasman the day before and so we had to hang about for him. In fact we were misinformed and headed off in the car but then had to return as he was coming in a quarter of an hour. Anyway he sorted out our boiler and it was nice to have the heating back (although it has been quite mild).
Later Dylan and I watched the rugby games while our wives hit the charity shops of West Hampstead. Dylan and Cat then headed off to a Gatsby evening in town while we watched most of the latest episodes of Silent Witness. In between all this I read a chunk of Unexpected histories a Christmas present.
: Wednesday, February 13, 2019