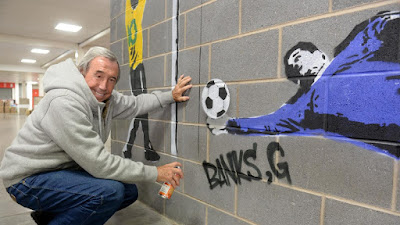 Gordon Banks of 1966 fame, the third to go now (after Bobby Moore, Ray Wilson and Alan Ball) was a minor boyhood hero of mine. He played for unfashionable clubs (Leicester and Stoke) and was a very sober and unflashy player, the sort that Alf Ramsey went for that fooled me a bit so that I was more impressed by Peter Shilton. I remember a comic including a series of pics showing that amazing save against Pele in 1970. I was on a train once and Gordon Banks happened to be on it too for some reason as we pulled into Paddington. Today the media are saying that he would have been knighted but for an admin error. I wonder how often that happens. It's odd the way we treat our heroes.
: Thursday, February 14, 2019