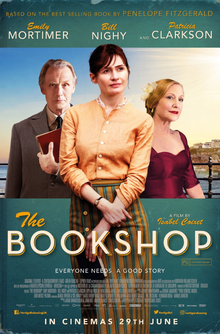 We enjoyed watching this slowly paced film harking back to 1959 and one woman's efforts to establish a bookshop. I have stated before that I am not fully signed up to the view that believes reading well written books is some cure all but we enjoyed the film on its own level. I read Penelope Fitzgerald's 1978 book a while ago and it was interesting to see how the characters were handled in the film. It was a good idea to include the modern book in the shot of a modern bookshop in the closing sequence.
The film is narrated by someone other than the book I think and the film has a dramatic ending I don't recall from the book. Silly things like including a book by Philip Larkin ten years too soon is done just to annoy pedants like me I guess. I'm not sure about the hints at romance between the two main characters either. Why the cowman becimes  aferryman and where th ghost goes I ahve no idea.
The villagers are presented in a pretty negative light. I would like to see more balance which may be the book has.
: Saturday, February 16, 2019

Funnily I saw the film a few days earlier. From a Christian perspective I found it quite interesting that these so called nice villagers were so evil. Despite their outward appearance they were born in sin and shapen in iniquity.