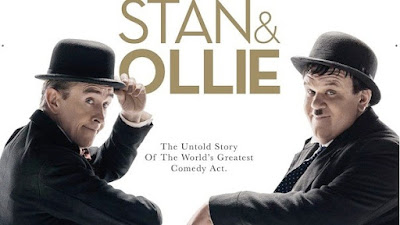 I finally got to see the film about Laurel and Hardy yesterday. A  double treat I saw it in Cwmbran but that's another story. I really enjoyed the film, which I thought was done very well indeed. The decision to place it where they did (in 1953 in Britain) and not to include representations of the very final years (Hardy died 1957 and Laurel 1965) was wise. The film is full of gentle humour and little by way of action but this was not at all detrimental. What emerges is a great friendship, not without its vicissitudes and some great humour. I loved it. Whether others would I'm not sure. My wife for example would not have enjoyed it as much as I did (she went to see the Mary Poppins film) and certainly not my son and his cousin (who went to see How to train your dragon 3). It deserves Oscars.
: Saturday, February 23, 2019