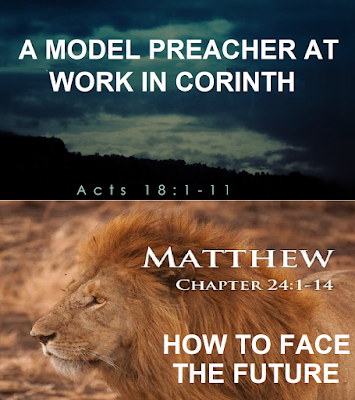 It's half term here and I think that must have had an impact so that we were slow filling up in the morning and only about 10 in the evening. Nevertheless, we are seeing people from the area - a lady who began coming recently but often cannot make it, another lady who we know from the mums and tots and other visitors. I was quite long in the morning on the first part of Acts 18. I think it was interesting, however. Then in the evening we began on Matthew 24 which is always going to be difficult but it went okay. We had communion before the evening meeting (unusually we ended up using white grape juice rather than red). In the afternoon we had four member around (a single lady, a widower and two husbands whose wives are away for half term). It wasn't planned but these are among our longest serving members, going back over 20 years and more. A classic line up as we remarked.
: Tuesday, February 19, 2019