New Edition of Foundations Out 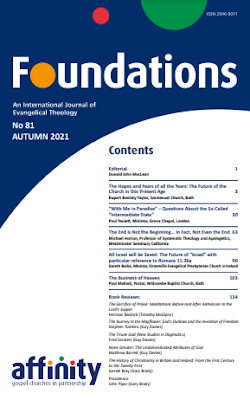 The latest edition of Foundations the journal of Affinity is out, Number 81. The bulk of it is taken up with the papers given at the theological conference earlier this year on eschatology. Among the reviews I have two - on The History of Christianity in Britain and Ireland: From the First Century to the Twenty-First by Gerald Bray and John Piper on Providence. The journal can be found here.
The Piper review begins

Piper has now produced over fifty books. Like the others, this latest one is careful and exact, fresh in tone, homiletic in style and eager to present biblical truth. It contains some few recycled older pieces but this is primarily fresh material, even where the themes are familiar. It is, may we suggest, his “Hamlet”.
It is in three parts. Part 1 seeks to define the subject. Typically, Piper makes use of traditional material such as the Westminster Confession but seeks a new spin, here including the idea of our enjoying God. He also tackles the push back that such high views of God’s sovereignty can tend to provoke.
Part 2 looks at the ultimate goal of providence. In three sections, it goes back first to creation and even before that, then looks at the history of Israel from Abraham to the return from the exile. A third section introduces the new covenant.
It is not until Part 3 and the nature and extent of providence that we begin to touch on more expected themes such as earthquakes, the 2004 tsunami and the testimony of Nate Saint and Elizabeth Elliot (379). This final part has nine sections and is very practical. The topics are nature, Satan and demons, kings and nations, life and death, conversion and sanctification, ending with the triumph of Christ and his return. This part of the book is full of helpful statements on living the Christian life in the light of God’s sovereign providence. ...