10 Euphemisms for death from Monty Python 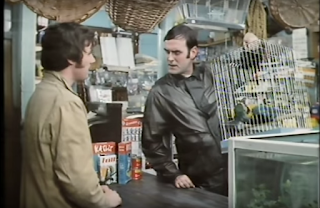 This list was inspired by a question on University Challenge. The speech is Mr Praline's (John Cleese) to the shopkeeper (Michael Palin)
1. 'E's passed on!
Pass on or pass away has apparently been used in the sense 'die' since about 1375; Lay Folks Mass Book (MS. B) 112: “God lord graunt .. rest and pese Þat lastis ay to christen soules passed away.” It implies a life beyond this one.
2. This parrot is no more! He has ceased to be!
This is the more correct way to speak of the death of a parrot, which would have no after life.
3. 'E's expired and gone to meet 'is maker!
To expire is to breath out one's last breath. One's maker is, of course, God. A British phrase, it is only found as far back as 1814.
4. 'E's a stiff! Bereft of life, 'e rests in peace!
The slang term stiff for a dead body (where rigor mortis has set in) dates back to 1859.  Rest in peace (Latin: Requiescat in pace) is a short epitaph or idiomatic expression wishing eternal rest and peace to someone who has died. The expression typically appears on headstones, often abbreviated as RIP. It appears to go back to early Christianity but probably comes from Judaism.
5. If you hadn't nailed 'im to the perch 'e'd be pushing up the daisies!
The exact origin of the phrase pushing up the daisies is disputed. Some take it back to 1860. It is a fairly short step from daisies growing above the bodies of the dead to the idiom. It is certainly at least as old as World War I. It is used in the poem A Terre by Wilfred Owen about the physical loss suffered by a soldier entrapped within his deteriorating body. The link between daisies and death (particularly innocent death) is obvious. The Celtic poet Ossian wrote of how unborn children would return to the ground as flowers. A woman named Malvina, who was mourning the death of her baby, was consoled by the Maidens of King Morven. Malvina was told that her child had turned into a flower with a golden disc surrounded by silvery petals. It supposedly looked like an infant playing in a field.
6. 'Is metabolic processes are now 'istory!
This sounds fairly original. Two types of metabolic reaction take place in a cell: 'building up' (anabolism) and 'breaking down' (catabolism). Anabolic reactions use up energy. Catabolic ones give out energy. Both of these cease when an organism dies.
7. 'E's off the twig!
A British slang phrase and euphemism. Hopping off or falling off the twig appropriately uses bird imagery.
8. 'E's kicked the bucket,
Kicking the bucket goes back as far as 1785 and is perhaps is from a word referring to a "beam on which something may be hung or carried" (1570s), from French buquet "balance," a beam from which slaughtered animals were hung (by the heels or hooves). This was perhaps reinforced by the notion of suicide by hanging after standing on an upturned bucket though there is also a Norfolk term bucket used for a pulley.
9. 'e's shuffled off 'is mortal coil,
The phrase is found in Hamlet's famous to be or not to be speech. Mortal coil refers to the bustle and turmoil of this life.
10. run down the curtain and joined the bleedin' choir invisible!!
Run or ring down the curtain refers to lowering or closing the stage curtain at the end of a theatrical performance. It could just be a corruption of bring down the curtain but appears to refers to the practice of ringing a bell to signal the time to close the curtains. Curtains were also 'rung up' and the practice remains well-known to theatre-goers as 'the bell' which is rung to signal that a play is soon to begin or resume after an interval. An early citation is found in David Garrick's 1772 farce A Peep Behind the Curtain: "Pray be so good as to ring down the curtain, that we may rehearse in form." The figurative use began use in the early 20th century. Eg Sheila Kaye-Smith on John Galsworthy: "Thus the curtain rings down on Irene Forsyte, crushed under the heel of prosperity."
O May I join the choir invisible Of those immortal dead who live again are the opening lines of a poem by George Eliot.
THIS IS AN EX-PARROT!!
: Tuesday, March 20, 2018