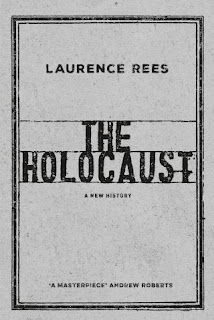 This is another one from the same source as Silk Roads but shorter (only two thirds of the last one) and easier to read I found. I am familiar with the Nazi story through the three volume work on the Third Reich by Richard J Evans. This work by Laurence Rees narrows down to the death of Jews (and others) under Hitler and carefully sets out the way the whole horrific thing unfolded bit by bit. It is written with great care and thoroughness and a judicious balance of detachment and occasional identification. The only slips are a brief but misjudged slur on the New Testament and a failure to emphasise the effects of Darwinism on the holocaust. The constant references to eye witness accounts gives it a vividness that might be lost otherwise. No matter how much you read such material it is hard to understand how on earth it happened. Only a robust doctrine of man's depravity fits with the facts.
: Tuesday, March 06, 2018