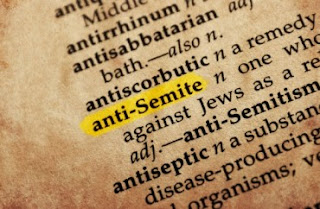 Anti-Semitism is in the news again. I step towards the subject gingerly as I would guess it is the easiest thing in the world to fall into. (I find myself in danger of falling into it regularly on the roads near here. There are many rude drivers about in this part of London. Some of them are Jews, which is sometimes obvious, but the moment I start thinking rude Jewish driver I think I am in danger).
All I wanted to share was an anecdote from my youth that I go back to from time to time. Where I grew up, as far as I am aware, there were no Jewish people (people of colour were an utter novelty, one or two in a school of 1700 was the norm; the boy from Yorkshire and the boy from London stood out like sore thumbs, even the girl from Neath did).
In the sixth form, Friday afternoon was rounded off with a thing called symposium (none of us had any idea it meant drinking party!). A visiting speaker would be invited to address the sixth form and although I remember very little of it (apart from a man who appeared to be saying Aber-ustwyth rather than Aberistwith and the time our music teacher briefly mentioned Jan Akkerman) I think they were informative and interesting times.
Anyway, one afternoon a Jewish lady came and spoke to us. Again, I remember little she said but I do recall that she managed to turn the whole room (most of whom, if not all, had never met anyone Jewish) against her.
It was during the question time when one of the girls asked about what Jews call marrying out. This lady must have been quite orthodox and quite sensibly argued it was best for marriage to take place within the faith. This did not phase me because by then I had long held the view that Christians should marry Christians and this view was little different. Besides, as a good evangelical I had picked up that Jews are special and we are to love them as well as everyone else. (I was such a bad case that when a man came to our church and said he was Welsh and Jewish and so twice blessed I took him quite seriously!).
The rest of the sixth form did not tend to this view. That had picked up the Austenesque idea that marriage is for love and no other question needs to be considered. And so first the girls and then practically the whole room turned against this poor woman who, I think, had begun to alienate people by her sheer enthusiasm and commitment to a way of life we knew little about.
If kids from South Wales with no previous can become antisemitic in the course of an afternoon no wonder there is so much of it about. Not that there is any excuse, just simply a need to take care.
: Wednesday, March 28, 2018