Doddridge's book and an unconsummated marriage 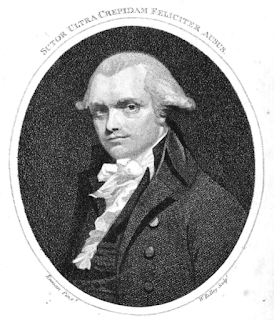 One of many books I am reading at present is a Book of London Stories which includes a piece by one James Lackington. It begins with an interestiing reference to a book by Philip Doddridge.

A Friend of mine, of whose veracity I entertain the highest opinion, has favoured me with an account of a lady, who has to the full as much, indeed more of the spirit, but without the good nature of Nancy Lackington. The fact is as follows: "'Tis true 'tis pity: and pity 'tis it's true." Mr. R—t, a genteel tradesman with whom I am acquainted, having lost his second wife early in 1790, courted and married one of the holy sisters a few months afterwards. They had lived together about six months, when Mr. R—t, one Sunday, being a sober religious man, took down Doddridge's Lectures, and began to read them to his wife and family. But this holy sister found fault with her husband for reading such learned rational discourses, which savoured too much of human reason and vain philosophy, and wished he would read something more spiritual and edifying. He attempted to convince her that Dr. Doddridge was not only a good rational divine, but to the full as spiritual as any divine ought to be; and that to be more spiritual he must be less rational, and of course become fanatical and visionary. But these observations of the husband so displeased his spiritual wife, that she retired to bed, and left her husband to read Doddridge's Lectures as long as he chose to his children by a former wife. The next morning while Mr. R—t was out on business, this holy sister, without saying one syllable to any person, packed up all her clothes, crammed them into a hackney coach, and away she went. Mr. R—t, poor soul! on coming home discovered his immense loss, and in an almost frantic state, spent the first fortnight in fruitless attempts to discover her retreat.

Lackington was a bookseller. Here his target is an unrealistic and overdone spirituality. He is not happy either with the other extreme. which also existed among the late 18th century Methodists.
: Saturday, March 10, 2018